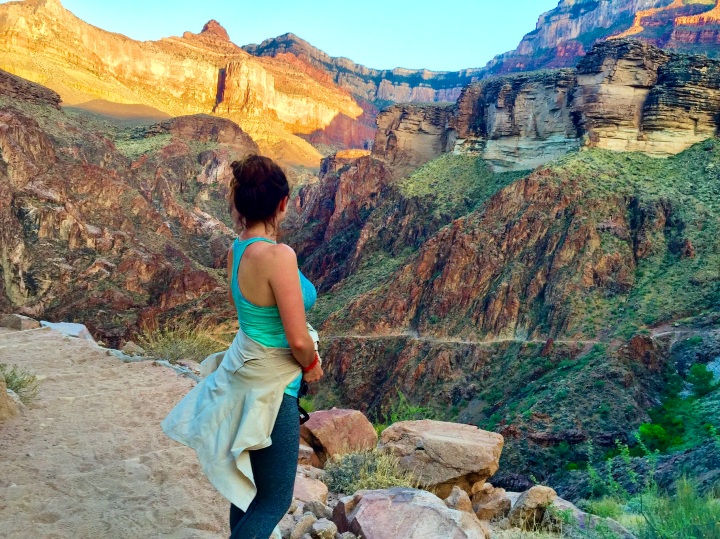 Four years ago, I completed a goal that at first seemed… impossible. I ventured with my then-boyfriend, Mr. Next Jen, my dad, and a few other of our adventurer friends on a hike in the famous Grand Canyon of Arizona. At sunrise, we would set off down into the canyon on the South Kaibob Trail, cross over the Colorado River below, then head back up to the top of the Bright Angel Trail. They call it a South Rim-To-Rim hike. The whole thing is about 17 miles and has an elevation change of about 4700 ft. down to the river, and then a shift of 4300 ft. back to the rim.

If it sounds intense, it’s because… IT IS. And if it sounds easy to you… well… we attempted it on a day that was well over 100 degrees F. – so the weather wasn’t doing us any favors.

At the time, I was not in fighting shape. If you had asked me to run a mile, I probably would’ve made it… but just barely. I was the novice of the group – and looking down into that canyon when the day finally came was a nerve-racking experience. Everything from poor exercise, to a terrible relationship with food, and undiagnosed Hashimoto’s Disease all seemed stacked against me in getting this feat completed. But my biggest enemy was none of those things… it was my own brain. I was standing in my own shadow of self-doubt.

I was standing in my own shadow of self-doubt.

Preparing for the big day, I hiked the (much less strenuous) hills of San Diego county and tried my hand at 100 floors on a stair master at the gym a few times. Slowly, my legs got stronger and my breathing became calmer. I used a dehydrator to make a huge batch of homemade beef jerky, purchased a couple boxes of twist tubes filled with healthy electrolytes, and tried to teach myself while hiking to eat and drink regularly – before I got hungry or thirsty.

It wasn’t until about halfway down the South Kaibob trail at 9am in the morning, that I realized the preparation paid off. Each of us had on fully-packed knapsacks with food and water, walking sticks, and clothes that completely covered our skin and face. We stumbled across a group of young women trying to help their friend up from underneath a small outcropping of rock. She was dehydrated, exhausted, sunburnt, and hungry. All she had was an empty Camelback, shorts, and a tank top. She admitted she was woefully under-prepared as we gave her some water and half a sandwich.

She eventually regained her strength and the group headed back up without further issue (as far as I know!) but it was a reminder to myself that the hardest goals can have setbacks when you aren’t prepared! The best thing to do when venturing forward is consider the possibilities and do what you can to prepare for them.

The South Kaibob was spectacular – swaths of red dirt coated our boots and the views in the morning light across the canyon were something right out of a postcard. At one point, the famous mules crossed our path and we had to balance precariously on the edge of a steep trail while the trudged past us. I remember thinking, “If a mule can do this, so can I!”

The best thing to do when venturing forward is consider the possibilities and do what you can to prepare for them.

The trip to the bottom of the canyon in that kind of heat is, well, hot. But its also surprisingly hard on your knees and ankles. The constant downhill pressure on your joints can be tough – I was just glad I had brought the walking sticks! When we finally rounded the bend and could see the Colorado River below us, I wanted to swan dive off the cliff and into the water. NOTHING sounded better than a refreshing dip.

We finally got to the beach, ripped off our shoes and socks, and plunged our aching, swollen feet into the river. And then immediately pulled them out. IT WAS FRIGID. The kind of frigid when its so cold, its hot? You know what I mean?

(I’m told that the usually temperature of the water of the Colorado River is about 52 degrees F, but regardless! It felt like ice water.)

We eventually made our way to a little creek where the water temperature was a bit more bearable, and relaxed for a little bit. Now it was time for the real mental preparation. You see, park rangers don’t recommend hiking the South Kaibob and the Bright Angel in one day. ESPECIALLY not on a day that was well over 110 degrees F at the bottom of the Canyon. But we weren’t going to be sleeping on the dirt that night, so we had to get back up to the rim, come hell or high water.

We hadn’t done hardly any sort of uphill hiking at all yet – The Bright Angel Trail is a much more lush and green part of the Canyon. I was feeling tired, but pretty good as I gazed around at the green and red decorated rock walls as we began or steady ascent. There is a part of the trail called the “Devil’s Corkscrew” which Mr. Next Jen had advised me (he had done the hike before) was the most challenging part.

The Devil’s Corkscrew is an array of quick and steep switchbacks that immediately got my heart racing. I felt sheepish as a family of four with two kids (maybe 12 years old or younger) passed by me as I was gasping for air. (You know, those naturally athletic types.) But when we got to the top, I felt pure elation. The hardest part was done!

Well, apparently the hardest part was yet to come.

Mr. Next Jen had wisely saved that piece of knowledge for later – the last leg of the Bright Angel Trail would take us doing a slow climb of switchbacks all the way to the rim for several hours in darkness – nothing but our headlamps showing the way. Its about 5 miles of what feels like sheer cliff and I’ll admit… it felt, in the moment, impossible.

I remember something my dad said to me when I was really struggling on the last couple miles – it isn’t some one-liner that you’ve never heard of before. He said he was proud of me and that I could do it. It was such a simple piece of encouragement, but it truly helped me get through the strain.

It was such a simple piece of encouragement, but it truly helped me get through the strain.

I had been feeling embarrassed that I was having a challenging time keeping up, and I was reminded of all of those soul-crushing times as a kid when I couldn’t kick the kickball, or I would miss the basket. I was an adult now, and this feeling of self-loathing hadn’t gone away. What it took was a little outside push and a lot of inside force to make myself take my challenges in a different stride.

I could do this. I could finish.

When we finally rounded the last bend, past midnight, I had never felt so validated. I had finished something. I had completed a goal with preparation and will-power. I had overcome a GRAND CANYON-SIZED problem.

I hope this provides some inspiration to find the strength to overcome your Grand Canyon-sized problem and come out the other side a better person. ❤️ 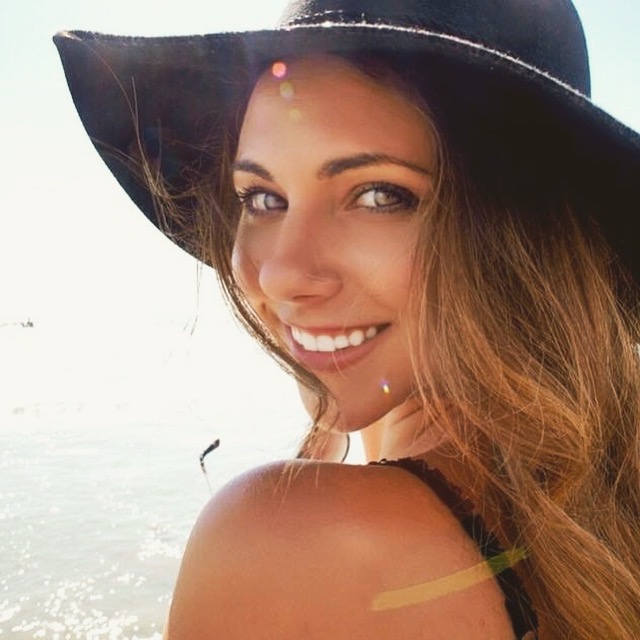 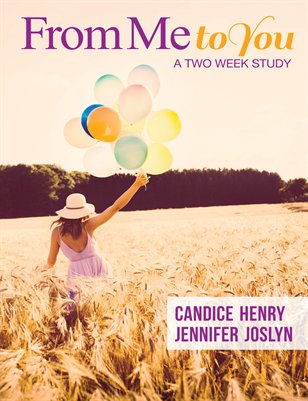